With crumbled buildings and burnt assets, starting over would be a long journey for many businesses. But not all was lost for Pacific Mutual. 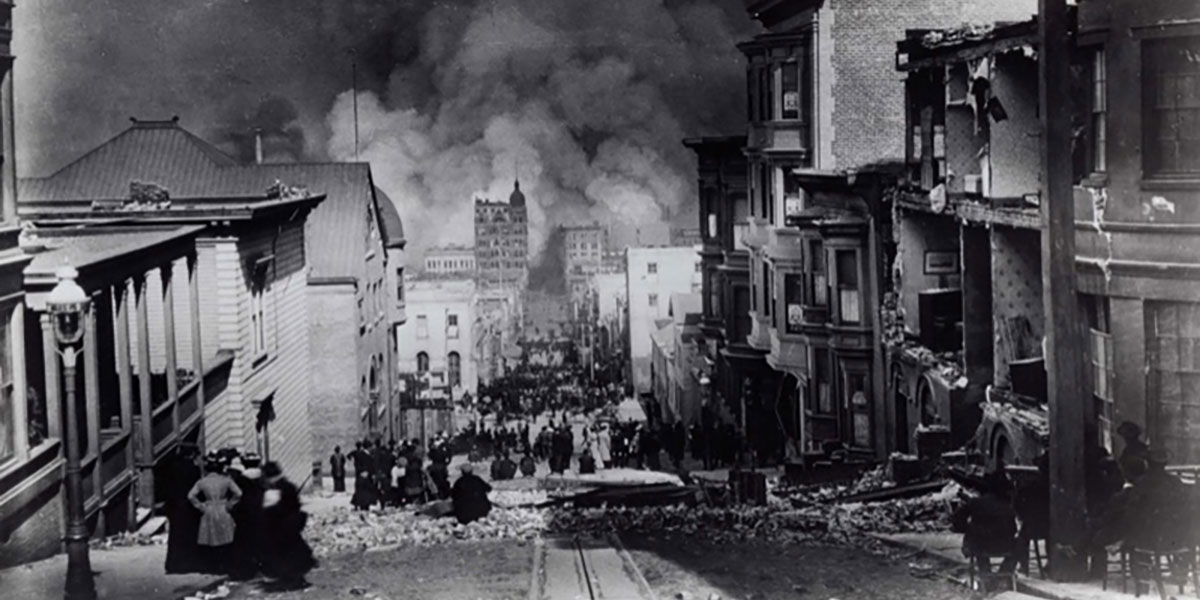 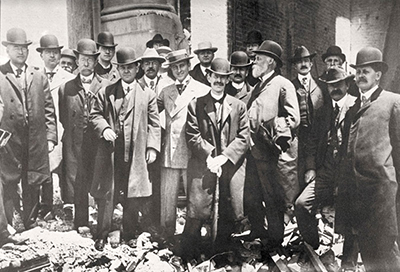 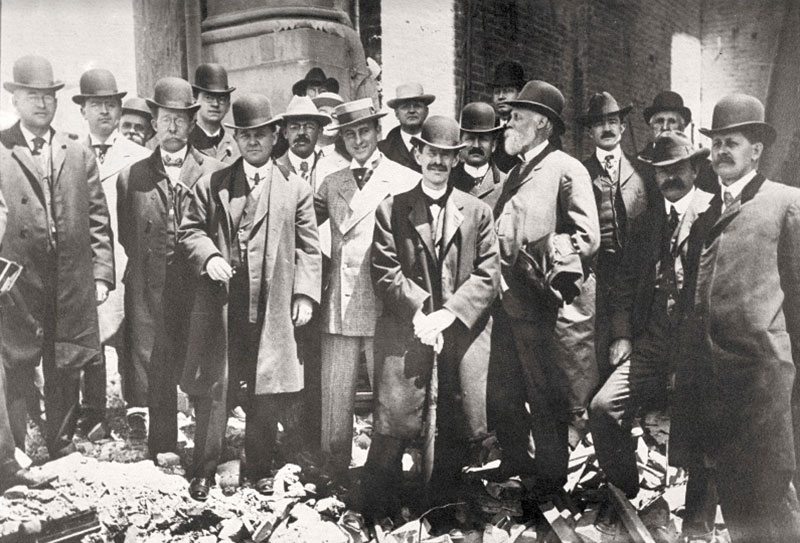 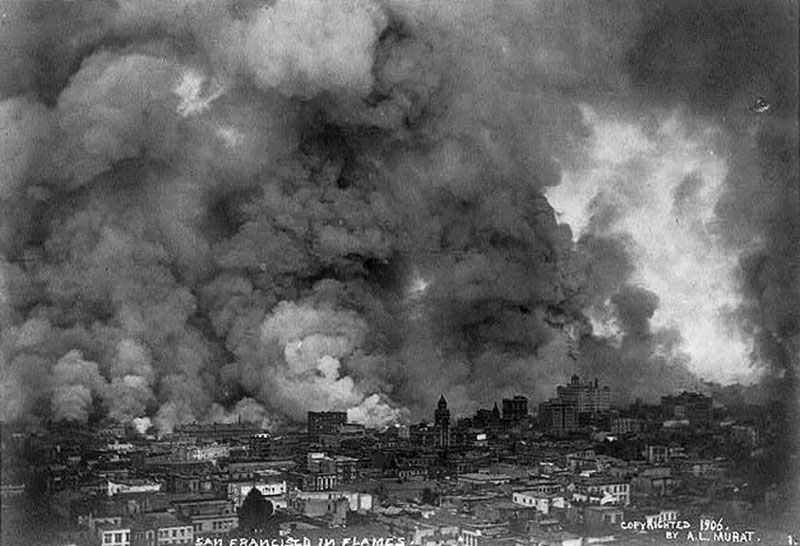 After the earthquake, San Francisco faced even more devastation as fire spread across the city.
Library of Congress, public domain 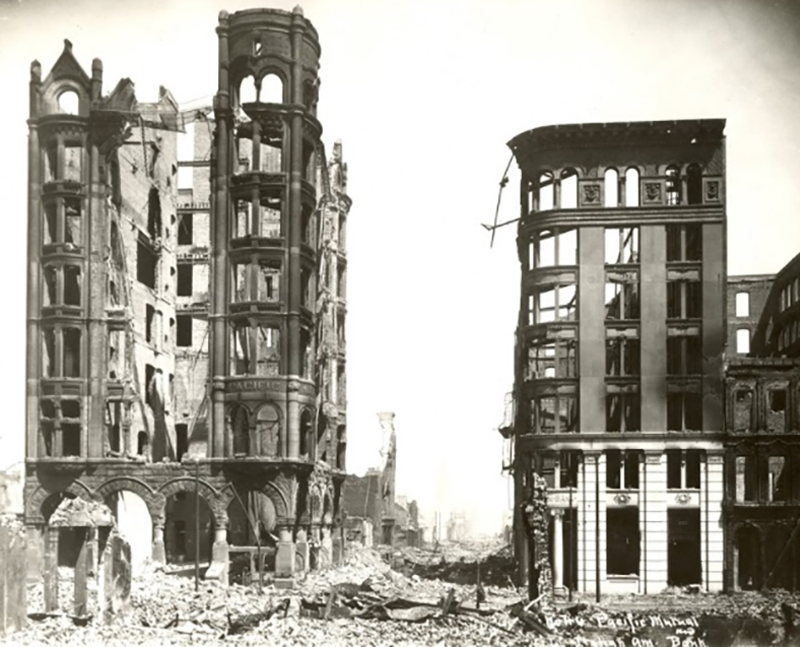 Registering a magnitude of 7.8, the earthquake that hit the San Francisco Bay Area on April 18, 1906, was violent by any measure. After shaking the city for just one minute, it left a broken city and killed hundreds, possibly thousands, of people.

Although Pacific Mutual’s headquarters survived, a new danger was fast approaching. The quake led to a series of immense fires across the city that leveled anything still standing in their path. With the city’s water mains badly damaged, there was little to stop the flames.

A few employees reached the building in time to take stock of the situation at the corner of Montgomery and Sacramento streets, including Richard J. Mier, whose quick thinking made him a legend at Pacific Life. Mr. Mier saw $72,000 of bonds as well as stock ledgers that were not in the company’s fireproof safes. He quickly bundled up the documents and tore down the stairs with them. He climbed to the top of Sacramento Street to watch the path of the fire before leaving to bury the documents in his basement for safekeeping.

Pacific Mutual’s building was destroyed later that day as fire swept through the business district.

The fires burned for days, and by the time they died out, 80 percent of the city was in complete ruins. With crumbled buildings and burnt assets, starting over would be a long journey for many businesses. But not all was lost for Pacific Mutual.

In addition to Mier’s recovery efforts, a few weeks earlier the company had acquired additional fire insurance for its headquarters and reinforced its fireproof vaults at the request of a new executive, George Cochran. Cochran had helped purchase a controlling stake in Pacific Mutual for Conservative Life, a young insurance company based in Los Angeles. Because Pacific Mutual was larger and more established, the two companies agreed that Conservative Life would be absorbed by Pacific Mutual. The deal was announced on March 12, 1906, and Cochran named first Vice President and Treasurer.

Cochran insisted on upgrading Pacific Mutual’s facilities as part of the consolidation. In his mind, the five vaults in the building weren’t of sufficient quality or size for the growing company. Two additional state-of-the-art vaults were installed and the existing ones reinforced. He also made sure Pacific Mutual purchased almost $90,000 in additional fire insurance. By early April, the improvements were complete.

After the fire, six weeks passed before the building’s upgraded vaults were cool enough to open. In addition to the documents Mier had saved, the rest of Pacific Mutual’s most valuable documents inside were unharmed—to everyone’s great relief. Cochran’s foresight had been invaluable.

With important records in hand, Pacific Mutual could make a new start. There was just one problem. Its headquarters building was a pile of rubble.

On May 18, 1906, the board of directors gathered on the site of the former seven-story building. Its members had a decision to make. Where would they rebuild? In San Francisco, which could take months or even years to recover? Or would they look elsewhere, using this as a chance to start fresh in a new city?

How does Pacific Life rebuild its headquarters and continue to grow the business in the early 20th century? Find out in the next installment of the series, Welcome to Los Angeles.