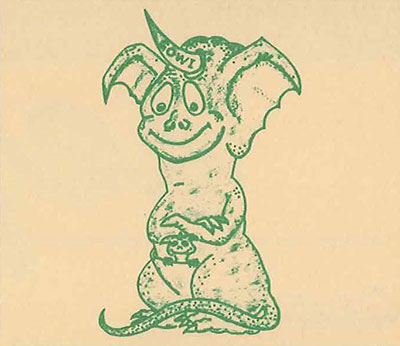 
What do openness, change, risk-taking, accountability and goal orientation have in common with a sketch of a horned little creature?

They all represent Pacific Life’s values in its “Get On With It” campaign, of course.

The insurance industry was changing in the 1980s, and Pacific Mutual had to change with it, including new business models and products. In 1985, Pacific Mutual decided to define its mission and vision, and encourage employees to embrace a set of corporate values that would help its culture grow—not to mention its bottom line.

Most of these values were not new to Pacific Mutual, but defining them and promoting them was. In a nod to the self-motivation spirit that was popular at the time, a theme emerged: “Get On With It”—or GOWI—whether you’re dealing with successes or challenges.

As part of its GOWI promotional campaign, Pacific Mutual hosted a contest for employees, to see who could best illustrate the company’s core values. Creative entries came in from the field as well as the home office, but Tom Smith of Corporate Accounts won the day with his green GOWI creature and description of how its physical traits represented the values. Soon, the sketch became the campaign’s mascot. A few years later, the company also began giving GOWI awards: small monetary prizes that recognized employees who went above and beyond in promoting teamwork and core values.

By the early 1990s, the campaign had subsided, but Pacific Life’s culture and values were still going strong. And occasionally, someone could still spot the GOWI mascot watching over Pacific Mutual and smiling.


A Foundation for the Future